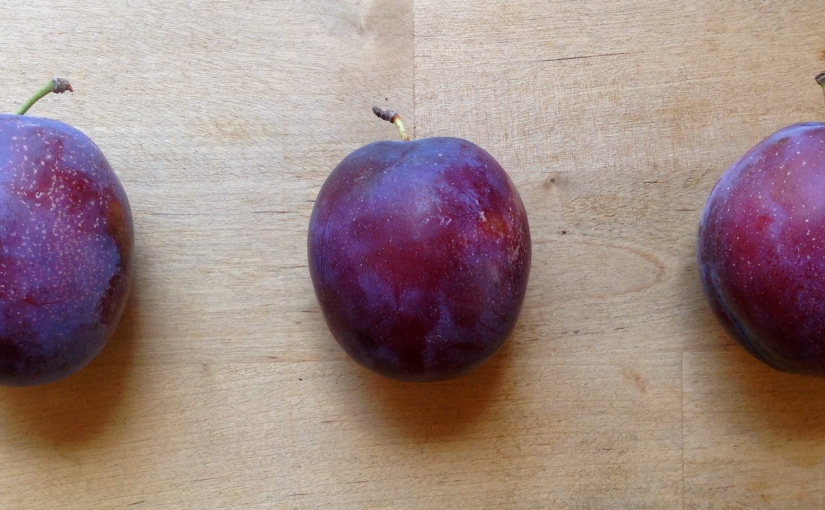 A little late writing up this recipe but plums are still hanging on at the farmers market so I feel they are still acceptable to discuss. Plums are a really delightful fruit, such a variety of texture and flavor – greengages are my favourite variety but unfortunately they are only rarely available at the market, and when they are they are eaten in huge number on the walk home, leaving few left for cooking.

The downside of plums is how easy they are to bruise, limiting their travelling abilities, many a plum has turned to mush is my lunch box by the time I get to work. They clearly deserve more care then I gave them! So instead I made a kind of cereal bar with them so they could be protected on the journey by a coating of oatey goodness.

I snack pretty much constantly at work, I like having something in my bag that feels like a little treat to help stop me reaching for the chocolate bars on a draining day (well that is the theory!).

I love these bars because they are really easy to adapt to what fruit is available, as well as plums I have made them with apples, peaches, apricots and dried figs. 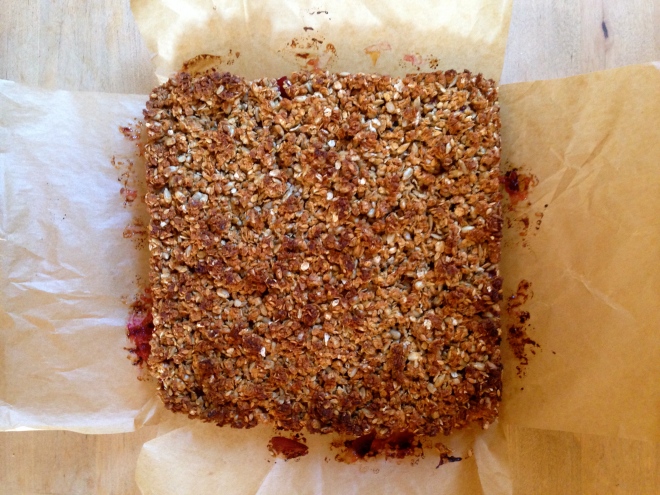 Add all the ingredients to a small pan and cook over a low heat for around 10-15 minutes until the plums have cooked down to a thick just pourable consistency.

Add the maple syrup, agave and coconut oil to a small pan and heat on a low temperature until the coconut oil has melted.

In a medium bowl add the liquid ingredients to the dry and thoroughly combine.

Bake at 180 degrees for approximately 40 minutes the oatey topping should be golden brown.

Allow to cool in the tin then cut into bars and serve.

P.S reheated with the addition of a little ice-cream this could defiantly pass as a pudding.

P.S.S Once you are feeling christmassy I’m sure these would be delicious with an apple and mincemeat filling J